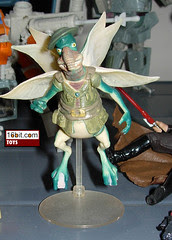 Bio: Watto is the shrewd and possessive owner of a parts shop in the rugged frontier town of Mos Espa. When visited by Anakin Skywalker ten years after losing him to Qui-Gon Jinn on a Podrace bet, Watto informs Anakin that his mother, also a slave, was sold to a moisture farmer named Cliegg Lars. (Taken from the figure's cardback.)

Commentary: In 2002, it seemed someone at Hasbro said "let's just surprise the fans all year long." Figures like a new Luke Bespin, tons of Tusken Raiders, and this new Watto were big surprises. After Episode I, nobody expected to see Watto again as an action figure, let alone one that has a stand that makes him look like he's flying. Plus he's got a little Pit Droid hat! All in all, this is a nice figure-- I mean, look at the detail. Sure, he only has about five meaningful points of articulation, but his skin is nice and wrinkly, his wings are fluttering in mid-flight, he's got a big happy grin on his face, and he generally just looks great. There's a lot of detail to be seen here, and the figure was originally a low-low $4.99. Sure, he lacked accessories, but he didn't need them, because he has the most important thing of all: personality. If you don't have any Watto toys, get this one-- the display stand makes him a bazillion times cooler than other releases, plus he's still cheap on the secondary market.

Collector's Notes: This figure was released around the same time as Ephant Mon. Guess which was more popular? To date, this Watto figure has not been reissued, and if memory serves, this was the most recent Hasbro Watto product. It might be the most recent Watto figure-related merchandise of any kind. A pity, as Hasbro does good work with the character.

Email ThisBlogThis!Share to TwitterShare to FacebookShare to Pinterest
Labels: Attack of the Clones, Saga