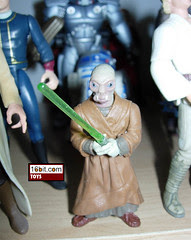 Bio: The Jedi children Ashla and Jempa are members of the Mighty Bear Clan, a communal group of young Jedi hopefuls ranging in age from four to eight. Comprised of many different species, the young initiates rely on the tutelage of Jedi Master Yoda, who often marvels at the cloudless insight and impressive scope of the young minds. Under Yoda's careful eye, clan members begin lightsaber training at a very early age, but their protective helmets and special training sabers ensure safety in their Jedi lessons. (Taken from the figure's cardback.)

Commentary: It's not to late-- to Wiphid! Jempa here is what a baby K'Kruhk or J'Quille looks like, without the fur and beady little eyes. The figure is based on the same young padawan body used for two other figures, but with a new head, new helmet, and new arms. Not surprisingly, it's pretty easy to make several distinctive action figures with minimal changes, if the generic body is right-- and this one is. There's not a lot of detail needed to crank out a kindergarten Jedi in robes, and the figure looks pretty good anyway. His eyes are big and bright, he has a pair of big tusks, and he's got a lightsaber. What more could you ask for? Sure, some fans are going to be upset it isn't super articulated, but who listens to them anymore anyway? For a figure from 2003, it's great, it's a clever reuse of tooling, and it's a new character all in one. How can you go wrong with Jempa?

Collector's Notes: Very popular (and hard to get) on its initial release, the pair of Ashla and Jempa were eventually repackaged. There were two styles of "Saga" cards in 2003, and this figure came on both of them. (One has a gold stripe on the side, that's the second release.) As there's only three figures in this little sub-set of young Jedi, a collector can easily collect all three for very little money.