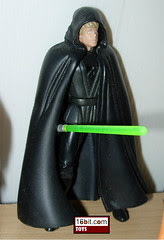 Bio: A celebrated rebel pilot, leader, and legendary Jedi Master, Luke Skywalker was most famous for destroying the first Death Star and providing the catalyst for Darth Vader to kill Emperor Palpatine, which led to the eventual downfall of the Galactic Empire and made him the greatest hero of the Alliance to Restore the Republic. He was later promoted to General, though left the military to become an influential member of the New Republic and a prominent Jedi Master. (Stolen from Wookieepedia.)

Commentary: At first, this Luke Skywalker was one of the most exciting figures of the year. I mean, it was the first ever modern version of Luke from Return of the Jedi, how could you not be giddy at the thought of such a great figure being revisited? While fans loved the figure at first, what with its hard plastic cape and waist joint, it became obvious that the figure needed some work. After all, while there were minor differences, Kenner was using the same basic Luke head for every single figure-- and Luke didn't look the same in all the movies. The detail was light, and authenticity was iffy (high heeled boots?), but the figure sold very well to a new generation of fans who had not yet gotten picky, plus (if the numbers we are told are true) a couple hundred thousand fanboys and speculators bought into it. Today, as a new collector, the only reason to get this figure is to "collect them all." Several new versions of this costume have been produced, and this one does not hold up well to the test of time-- still, it's an amusing curiosity, and can be had cheaply.

Collector's Notes: This figure is remembered for its variations, rather than its own merits. The first release had a tan vest, while the rest of the run was grey-- some fans thought this was to look more like Luke in Shadows of the Empire, but really, this is just an error from what we could infer from Hasbro employees at the time. (A variation to you and me.) The figure would also go on to become the famous "Theater Luke," given away in 1997 at screenings of Return of the Jedi with special packaging. The special packaging is notable because it has very weak adhesive keeping the bubble on the card, and most of them eventually fall off if not properly cared for. Even an AFA sample will likely age and eventually fall off, thus rendering the grading useless. But I digress. The figure was a good one and had a good run as one of the very first modern figures based on Return of the Jedi. It's also worth noting this figure shipped alongside Shadows of the Empire action figures.