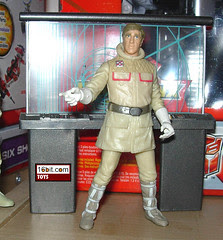 Bio: A battle-weary but capable commander, General Carlist Rieekan was the Rebel officer in charge of Echo Base on Hoth. Rieekan had to make the difficult decision of evacuating the base that the men and women under his command had worked so hard to build. Most of the evacuation transports were able to escape Imperial pursuit and regroup elsewhere, ensuring the Rebellion's survival. Born on Alderaan, he was off-planet, inspecting a new satellite transmission system when the Death Star obliterated his home. (Taken from the figure's cardback.)

Commentary: The Ultra line of figures is nothing short of legendary in some circles-- it represents a time where Hasbro decided to make a line of $10 figures that fans of all ages could probably all agree were worth the money. There are, of course, exceptions-- like General Rieekan. While there's nothing wrong with the figure, he works as an example of bad pricing, and a good example at that. When he was released, figures were usually $5, possibly $6 in stores. Rieekan was $10, had only six points of articulation, no blaster, and a screen that could probably have been crammed in a 2004 basic figure package. I've always felt the reason for the $10 cost was a lower production run due to the smaller audience for the figure, who wouldn't necessarily mind paying $10. Thankfully, the figure is good-- it looks like the actor, or is at least close enough. The big screen is an accessory that really does make your Hoth diorama look better. The only thing this figure has going against it is the value proposition-- if this were a basic figure, it'd be a great deal. As an Ultra figure, it wasn't exactly on the same level as C-3PO with an escape pod, or Jabba the Hutt in his fat glory. The Rieekan figure you see here is nearly identical to the 2006 release, except that one had a gun and a display base, and was probably worth the money, all things considered.

Collector's Notes: This figure seemed to sell fairly well early on, and today, it isn't exactly easy to find all over eBay or elsewhere-- it seems Hasbro knew how many to make so the market wouldn't choke on too many of them, and now you can expect to pay more than the initial $10 asking price. Oh well, there's always the 2006 version.

The crazy thing about this figure was that it was out during the 2004 election season, and I thought that this figure was a dead ringer for John Kerry. It was really weird walking down the toy aisle and finding a 4 inch presidential candidate staring back at me.

Punchmaster General said...
This comment has been removed by the author.
November 3, 2011 at 4:56 PM