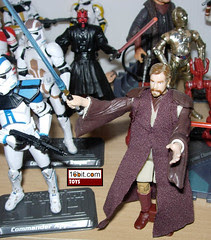 Bio: As a General in the Clone Wars, Obi-Wan Kenobi leads clone troopers into battle against the droid armies. He uses his skill as a Jedi Master and his control of the Force to defeat the deadly battle droids. (Taken from the figure's cardback.)

Commentary: It's worth mentioning that while this Obi-Wan Kenobi is a unique sculpt to this release, with good detailing, a nice head sculpt, and an amusing action feature. Which, I should mention, doesn't work too well. The figure can sort of jump, and the articulation is all tied in to this feature-- so he really isn't much of a toy beyond the jumping. He can't sit, but he might look OK in a diorama if you don't miss the mixed cloth and plastic look of his Jedi robes. The reason the figure costs $10? It also comes with a Super Battle Droid which has a decent sculpt, but again, not much articulation. This is a figure worth buying if you dig how it looks-- it's somewhat fun to play with, but the novelty wears off quickly and he isn't very good at slicing and dicing.

Collector's Notes: In 2005, this figure sold really well. In most areas, he sold through long before the clearance sales, probably in part because it looks like a two-pack, and two figures for ten bucks ain't bad. For $10 or less, it's probably worth getting, if for no reason other than to add to your droid stash. It's pretty cheap on eBay, mostly because of what I said above: it's OK, but it's not exactly great to look at or a lot of fun to play with for long.