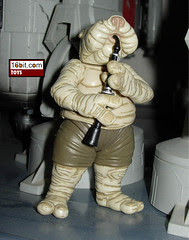 
Bio: Snit, stage name Droopy McCool, was a member of the Max Rebo Band. He was a Kitonak from the planet Kirdo III, and played a flute made from a hollow chidinkalu plant from his home planet. (Stolen from Wookieepedia.)

Commentary: A fatter, more wrinkly, less round version than his 1983 counterpart. Droopy McCool is one of the more memorable musicians from Return of the Jedi, wearing early boxer briefs, having no visible eyes, and getting down with his bad self while Jabba feeds his pets. With six points of articulation, the figure had more moving parts than the original, and he looked great. He had no problem holding his accessory, standing up, or being posed to properly occupy any shelf or diorama setting. There aren't a lot of alien figures you can buy (at least at the time) that weren't armed with pointy weapons or guns, so Droopy was a real novelty in that he was there to do his musician thing and basically have a good time. There's nothing wrong with this figure, but it would be nice to see a new version to get an idea what ten years of toy tech can do to update this already great design. If you like aliens from Jabba's Palace, you just can't miss this one-- and thankfully, you're just months away from getting another crack at him at retail.

Collector's Notes: Tracking down this set-- the first of three two-packs-- was a great way to finish up 1998 as a collector. Begging for rides to the Wal-Mart while in college was not a high point, but tracking down new figures of some of my all-time favorite aliens was a real treat, and now fans will have the chance to do the same thing again this year with reissues in screen scene packs at Wal-Mart. Of course, this statement aside, there's no getting past that the figure has one of the lamest names of the entire saga, and that's saying something.