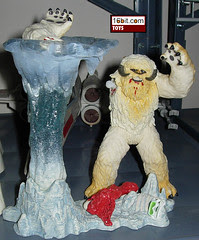 Bio: The bone-chilling cold is not the only danger that awaits a traveler on the Hoth plains. Despite standing over two meters in height, the Wampa ice creature is nonetheless a stealthy predator. Camouflaged by its white fur and the howlingb Hoth winds, a Wampa surprised Luke Skywalker while he was on patrol and dragged him to its cave as his next meal. When the Jedi freed himself, the Wampa fought him - and lost an arm in the struggle. (Taken from the figure's cardback.)

Image: Adam Pawlus' toy shelves. Note: part of the Wampa Cave comes with a Hoth Luke figure, and is not included in the icy setup you see here. You get the base, and the pillar, but not the piece on top of the pillar.

Commentary: I just love a Wampa. This guy is extra huge and has tons of additional torso articulation, so he can more easily bend over, be turned around, and so forth. (It's the same kind of joint you'd later see on a few Chewbacca figures.) Aside from that, the figure's articulation is nothing to write home about-- you can see jointed shoulders and hips, as ankles, wrists, and other such places to move might look cruddy on a hairy figure of this size. The detail is good, as there's a lot of fur sculpted here with some stains for added "realism." (Of course, depending on your imagination, it also looks like someone had an accident in the bathroom.) The figure has hollow limbs and is somewhat rubbery, which may lead to increased chances of discoloration over time-- so when you store this figure, store him away from your royal guards or anything that has something that could rub off on the big guy. I personally would rather not have seen the blood on his mouth, but hey-- that's me. It's a very good rendition of the Special Edition-era Wampa, complete with his meaty meal that can be posed to look like he's chewing it right off the bone.

Collector's Notes: The Wampa hasn't been in stores since 2004, but Hasbro will be putting it in a Battle Pack for an as-of-yet unknown retailer's exclusive soon with minimal (or no) changes. It's a fun figure, and if it turns out the Battle Pack doesn't come with the snow base, be sure to track down the original. You'll be glad you did.

Email ThisBlogThis!Share to TwitterShare to FacebookShare to Pinterest
Labels: Creatures, Saga, TAC, The Empire Strikes Back