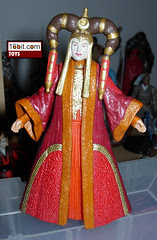 Bio: Queen Amidala, the young ruler of Naboo, will do anything possible to save her planet from the Trade Federation's diabolical attempt to consume her planet. (Taken from the figure's cardback.)

Commentary: In 1999, Hasbro finally went all out and made an enormous line of figures for the then-new prequel, and many characters like Queen Amidala received multiple figures due to costume changes or specific accessories that enhanced the figure to encourage additional sales. This was the first "royal" version of the character with full face make-up and ornate hair-- previous figures of Padme and the Queen (who were marketed separately at first) featured the monarch with no makeup and in what was essentially handmaiden gear. As the first full-fledged Queen, this figure set the stage for those to follow with limited articulation, lots of color, and very fancy hair. Aside from the neck and shoulders, she really isn't going to do much moving-- and her CommTech chip figure stand is going to make sure she doesn't fall over, too. Covered mostly in reds and gold, the figure lacks the overcoat as seen in the movie, but shows the dress in fairly exacting detail-- the figure looks good in 2007, nearly eight years later. Unfortunately, articulation is an issue, and when you get right down to it, the lack of accessories or extras of any kind make this a pretty lackluster value. But if you're a collector, this is a must-buy, because this costume has never been rereleased in this scale of action figure. And I use the term "action figure" loosely-- like many robed figures, she's more of a statue than an appropriate plaything for kids. Durable, sure-- but not a lot of fun.

Collector's Notes: This was a one-shot deal. She was popular, sure-- but the glut of product during 1999 made sure that she was available almost at all times. Today she can be had, quite easily, for $10 or less shipped via eBay.