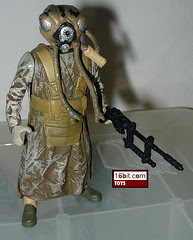 Bio: Zuckuss answers Darth Vader's call for bounty hunters to help locate the Millennium Falcon and her crew. (Taken from the figure's cardback.)

Commentary: Zuckuss was a real milestone-- the last Bounty Hunter to be remade in the modern era, and the first one that most fans consider "modern" enough to not demand a resculpt of it. This isn't to say there's no room for improvement, but Kenner pretty much nailed it so it isn't like it's a flawed figure. With only six points of articulation, the figure has limited mobility due to his hard plastic clamshell robes. Still, he looks good-- look at that costume! It's all nasty and brown and scuffed and stuff. He looks a little meaner than the movie, darker in color, less cuddly, more dangerous. As such, I guess there really is some room to try again, perhaps with soft goods like the vintage figure (which was, if you recall, named 4-LOM.) So a figure that's more tan in color with a few extra joints might be just what the collector ordered, and as we're getting an all-new 4-LOM this year, I'd almost say we should expect one in the next 18 months.

Collector's Notes: As the figure was originally offered in 1998, he was somewhat tough to get as he has never been reissued on a regular card. He did return to stores in 2006 in a Diamond exclusive Bounty Hunter Gift Set, though, with minimal (no?) changes.

Email ThisBlogThis!Share to TwitterShare to FacebookShare to Pinterest
Labels: Bounty Hunters, POTF2, The Empire Strikes Back