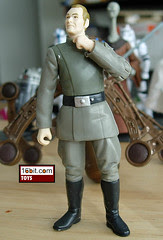 Bio: Second of the triumvirate in command of the Death Star, Motti believes the power of the Death Star dwarfs all others in the universe. He learns the fallacy of this belief at the hand of Darth Vader, to his regret. (Taken from the figure's box.)

Commentary: Back in early 2000, Power of the Force figures were surprisingly hard to get and figures like Admiral Motti proved especially difficult to find. So in 2006, Hasbro announced a new pack of Death Star goons, and a reissue (and repaint) of this figure with a better blaster was one of the lucky few to see plastic once more. While it would have been nifty to see a non-choking Motti, the figure still holds up fairly well with an articulated wrist and elbow on his right arm and "basic" articulation elsewhere. He can stand, he's colored to better match his gift set brothers, and his skin is very, very pale. Like, almost minty-green pale. The figure's likeness is pretty good, especially considering he came from an era where an accurate likeness on any human figure was usually coincidental. This is a good one-- if you missed the original release, this is a fine substitute. If you got the original, well, odds are you'll eventually end up with one of these when you buy the gift set. Not that this is a bad thing.

Collector's Notes: Still available, this set is one of those few mind-blowing releases where Hasbro did a fairly awesome job. There are a few places to nitpick, but as far as bang for the buck goes this is one of the finer sets to be had. After all, upon release, a figure costs about $6.99, and this set gets you 7 figures for about $40. Sure, Darth Vader is basically a throwaway, but the rest of the set is totally worth owning.