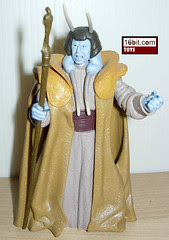 Bio: Mas Amedda was Vice Chair of the Galactic Senate under Chancellor Valorum and is now Supreme Chancellor Palpatine's majordomo. The Chagrian official uses his snakelike tongue to express agitation. (Taken from the figure's cardback.)

Commentary: I never thought I'd live to see the day where an action figure's selling point, in big bold letters, would be "Republic Senator." Mas Amedda is one of many figures with this two word marketing message from 2005, and one of the neater ones. With his robes, removable hat, and removable tongue, the figure is fairly imposing and you can actually do something with it. Rather than just have him stand around, his various accessories give you some options as to what you can have him do. "Hat on" and "hat off" isn't the most exciting such option one can aspire to have in a toy, but it's better than nothing. I mean, all poor Ask Aak can do is stand there, with or without his blaster. The highly detailed Mr. Amedda has lots of articulation in his arms, big robes, and can stick his tongue out at you-- and what's even more amazing is that he isn't the first Star Wars release from Hasbro to offer this exciting distinction. Mas, if you were to buy him, would most likely be a welcome addition to your shelves and/or Senate display. He isn't much of a toy, but the aforementioned play features do make him a little more exciting than the likes of Bail Organa or Mon Mothma. If the price is right, this is a nice example of Hasbro trying something a little bit more ambitious, and it turned out fairly well.

Collector's Notes: As far as I know, the whole tongue thing was excised from the movie, but it does make an amusing play feature. Seeing how Hasbro integrated a removable tongue into a figure of this size while making the figure look decent with it or without it is no small feat, and I gotta say I was impressed. The figure hasn't exactly been in high demand, but then again, neither was the 2000 release based on Episode I.

Email ThisBlogThis!Share to TwitterShare to FacebookShare to Pinterest
Labels: Revenge of the Sith, ROTS, Senators