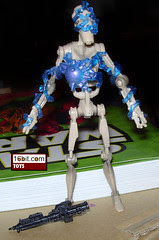 Bio: The wealthy Trade Federation secretly assembled a massive army of these unfeeling-skeleton-like battle droids. When the time was right, they were deployed against the peaceful inhabitants of Naboo as part of a Trade Federation power play. Many droids received severe damage during their clash with the Gungan army in the epic Naboo land battle. (Taken from the figure's Force File.)

Commentary: During Episode I, we were gifted but with one army builder-- the Battle Droid. In the following years, Hasbro cranked out several varieties. Heck, there were 5 different kinds of Battle Droid you could buy in the USA on regular cards in the first couple of months, so if you buy one of every unique Battle Droid, you can get a pretty nice army without even duplicating a figure. This one was a figure that in some respects is better for displays, but hey, it's still a fine example of what Hasbro was doing right. The figure has 9 points of articulation (2 in each limb plus the head) and a pretty good sculpt. A lot of those early Battle Droids have thicker legs so that the joint could be included, so it's a tradeoff-- you can have articulation, or accuracy, just not both. Still, this is a fun figure to play with because it offers a lot. If you like the damage, you can leave that on and have the figure popping out of a tank, falling over on the battlefield, or generally being assaulted. If you dislike it, it comes right off (although it is a bit of a pain to put it back) and now you have a decent standard Battle Droid. There is a little bit of weathering on the figure, as well as painted eyes, but aside from that it's pretty plain. Still, plain isn't bad-- Hasbro tends to overdo the battle damage on a lot of these figures. So, in short, the figure is a decent all-around trooper that offers more than the average Battle Droid. If that interests you, hey, awesome. Just be aware the head falls of easily once the boomer damage is removed.

Collector's Notes: Hasbro has made many, many Battle Droids. They did bonus Battle Droid overseas instead of CommTech chips, four variants of the basic TPM Droid, OOM-9, a droid with each playset, and then a bunch more for each of the other movies. (Well, not so much Episode III, but it does look like we can expect 8 or more versions of the Battle Droid in 2007 courtesy of Saga Legends and everything else.) What can we say, the little guys are popular!