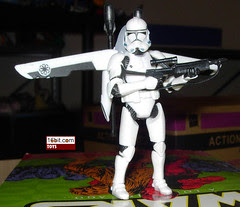 Bio: Certain clone troopers are specially trained and outfitted for aerial reconnaissance and battle. Winged jet backpacks with built-in launchers provide the means for air assaults on the enemy. (Taken from the figure's cardback.)

Commentary: While not taken directly from the film, this Clone Trooper was designed to be a fun toy and act as yet another Clone for we, the picky collectors, to dig up. The figure is almost super-articulated and was unique in that the hips were designed so the figure has no real problems sitting down-- other figures based on this design usually have problems taking a seat. The waist joint isn't very mobile, but the rest of the figure? Top notch. There aren't any foot peg holes, but the figure should spend more time being played with than sitting around on a shelf. (Or hang him up.) Push a button on the jetpack, and the wings pop out, and the rockets fire with less effort than you might want. The clone's armor is as good as any other Episode III clone, and as such, may not stand out enough for you to justify buying this one for his massive accessories. Still, it's creative, it's fun, and I like it. You might too.

Collector's Notes: This was a strong seller in 2005 and the mold was reused to make a grey Coruscant trooper for Target as an exclusive later on. The mold hasn't seen much other action, and the jetpack/gun/rockets are exclusive to this set. As such, why not track one down?