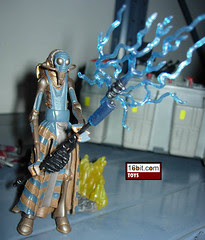 Bio: To guard their secret base, the Separatists enlist natives of Mustafar as sentries against potential intruders. Armed with long blaster rifles, the Mustafarians ride atop giant, flea-like creatures. (Taken from the figure's cardback.)

Commentary: Aliens are supposed to be cool, but the Mustafar Sentry is not. Sure, he's tall, has decent articulation, has a display base, is loaded with detail, and is a rarely seen creature. But you know what? He tends to fall down, even when placed on his stand. His spindly limbs don't help him stand upright. His face isn't much of a face-- where his eyes should be are two big ping-pong ball orbs. His earthtones aren't exactly striking colors. And he can't sit. It's hard to slam a figure with ankle articulation and lots of paint aps, but well, it's just dull. And this is saying a lot given that this figure followed such "excitement" as Zett Jukassa, Bail Organa, Captain Antilles, and the oh-so-thrilling Mon Mothma. I mean, this is an alien, and it's a troop builder, and it's a snooze. It's visually somewhat interesting to look at in that it's different from most other figures, but if you're a collector and you have 500 of these little plastic men, this guy will probably go straight to the back row of your shelves. This is no slight on the craftsmanship, but the character choice. (Although the craftsmanship was kinda dull too.) What can I say, I'm just not a fan.

Collector's Notes: It's not often I can say "buy it on eBay because Hasbro will probably never, ever want to release this again, ever." But here you go-- this is a figure that's kinda iffy, despite being cool on paper. Just because you're an obscure alien with a nifty weapon that came out in a new movie year, and as an added bonus, have no crappy action features, doesn't mean you're any good. What's really baffling is Hasbro made this guy before Commander Cody, Commander Bly, Commander Gree, and the much more visually exciting Mustafarian Lava Miner.