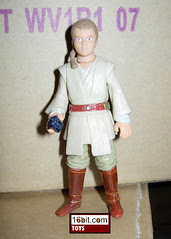 Bio: Exceptionally Force-sensitive, Anakin Skywalker escapes from a life of slavery to pursue his dream of becoming a Jedi Knight. (Taken from the figure's cardback.)

Commentary: This is the only version of young "Padawan" Anakin Skywalker, so if you like the idea of the figure, you'd better buy it. The figure includes a big plastic robe accessory (not shown) as well as a communicator, and nothing else-- no lightsaber, nada. With six points of articulation, Anakin was about par for the course in 1999. He isn't bad, actually-- there's decent detail, good texture, and overall, the head wasn't half bad. It's just that this was the "ceremonial" outfit and there's little action for the figure, and with no weapons, it's hard to imagine a lot of creative ways to display the figure. I wouldn't be surprised if the young Jedi was popular custom fodder, or a kid's favorite figure, because he turned out well and certainly doesn't make me feel sorry I got one. However, there's a distinct lack of direction of what to do with him, other than getting some steps and having him stand around Boss Nass and Queen Amidala. If there were more accessories, or perhaps a way to clip the communicator to his belt, I think this would be a figure I could talk up more. There's nothing wrong with it, it's just that it doesn't really wow the collector with some nifty feature. Given the fact he's short, a little something extra would've been nice. As it is, it's just nice.

Collector's Notes: The mold has never been reissued, so if you like it, get the original release. Or don't. We don't expect to see a new version any time soon.

It's ironic that you would say this could be a child's favorite figure because this was my favorite figure! I always used to pretend he was Anakin Solo.