Figure of the Day: Day 473: Stormtrooper 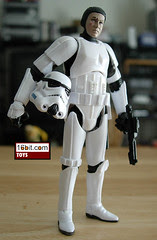 Bio: The Empire's elite shock troops, stormtroopers are unswervingly loyal to the Empire and serve without fear or hesitation. Their indoctrination and training are key to upholding the Emperor's bidding and maintaining his control of the galaxy. (Taken from the figure's cardback.)

Commentary: Since 2004, fans have clamored for Hasbro to crank out a cheaper, more easily available super-poseable Stormtrooper action figure since they did the $10 Vintage one. Well, we got our wish-- sorta. In 2004, figures were $5, and now they're $7. Plus the original figure had a normal head, and this one has a removable helmet which some fan love and others, well, not so much. The figure itself, head aside, is the same as the 2004 figure-- lots of articulation, lots of white. In short, on paper, an excellent figure-- but this mold's hips restrict movement, and the belt hanging off his right hip prevents the figure from sitting flush against a vehicle. So the figure has everything fans love-- loads of joints, removable helmets, holsters, all of that-- only they don't all quite function properly. This may or may not matter, depending on what you do with your Stormtrooper figures. If all you do is line them up or have them stand around in a diorama, this is a fine figure. if you want to keep it packaged, well, does it even matter? Along with the Tantive IV battle pack Stormtrooper, it's a good year for the Empire's elite-- and in some respects, the other figure is slightly better. It's whiter, it can sit better, it has a better stance, and as a toy, it's more fun. (And there's no helmet to lose.) Also, an added note-- the arms, on the upper shoulder area, are each labeled "L" and "R" which seems to be on the various "Vintage" Stormtrooper figures with removable helmets, including Luke and Han from the comic packs. The non-removable helmet figures don't seem to have these letters.

Collector's Notes: So when building your armies, remember: you've got options. Although it seems Hasbro will be shipping this one heavily in 2007. The figure is in heavy rotation but tends to be a fast seller. If you like the "Jango head under a Stormtrooper helmet" concept, or even if you don't, I advise all fans of Imperial troopers to buy at least one of this figure, if for no reason other than a little added variety in your garrison. I like it, I don't love it, but it's a gosh darn good figure and fun for what it aspires to be. It's also available, which is really the most important thing a figure can be these days. The mold is already used for comic-style Stormtrooper Luke and Han figures, plus upcoming Basso and Mouse figures. It's assumed we'll see movie versions of Luke and Han Stormtroopers based on this mold in the next year and change, and I'm hoping for some more craziness like the Stormtrooper from Alderaan. Remember #86? That was cool. Perhaps Tag and Bink could be on deck, too.