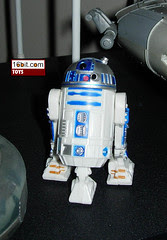 Bio: Princess Leia hides information about the Empire's latest weapon in the memory system of the resourceful, spunky and adventurous R2-D2, just before the consular ship they are on is captured by Imperial forces. She tasks R2-D2 to continue her mission to contact the long-lost Jedi Knight and Republic General, Obi-Wan Kenobi. Commandeering an escape pod, R2-D2 and C-3PO rocket away from the captured consular ship and crash-land on Tatooine. (Taken from the figure's cardback.)

Image: Adam Pawlus' toy shelves. (He doesn't look quite as good from this angle. This is definitely not his good side.)

Commentary: In a rare happening of reverse-battle-damage rereleases, this R2-D2 was a pretty awesome mold for its day. After years of odd, not-like-the-movies bright blue light-up eye ports, this figure won my heart by being a non-damaged R2-D2 with the best feature in the galaxy: a big black eye. The figure has a rotating dome and two articulated "legs," as well as rolling wheels under each foot. Unlike other releases, the third leg is not retractable. The figure would eventually be trumped by an overall better sculpt, but this is a very nice figure even without such details as sculpted wires on his feet or a holo emitter which you could actually plug a "projection" in to. It seems all the panels are painted where they should be, and the emitter was even painted black to give the added illusion of depth. This is an excellent figure for its day, or any day. I still think this is one of the best R2-D2s, and will continue to think so until Hasbro cranks out a release with the R4-G9 mold and a non-metalized dome.

Collector's Notes: R2-D2 was a repaint of the Naboo R2-D2 from 2001. This figure, and the assortment in which he shipped, is notable for paving the way for the next several years of the line. At the time, rereleases weren't entirely common, so this allowed an old figure to come out with new paint for increased sales, and we saw more of this in the Original Trilogy Collection, Episode III Heroes & Villains and Greatest Battles, and of course Saga Legends. It's worth noting this very figure was rereleased in 2004 on the Original Trilogy Collection packaging.