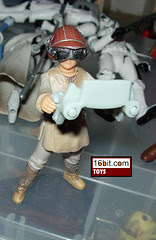 Bio: Thrust into the cockpit of a Naboo starfighter, young Anakin Skywalker unwittingly finds himself in the midst of an interstellar dogfight with Trade Federation droid fighters while heading straight for the droid control ship. (Taken from the figure's cardback.)

Commentary: After seven months, Hasbro cranked out its final waves of Episode I and the line ended on a bit of a whimper with figures like Anakin Skywalker in his pilot gear. Why is this dull? It was the second Pilot Anakin, the first came out with a Tiger electronics game in 1999, without the removable helmet. The figure itself is the same as the original Episode I Anakin figure, but just with new accessories. The coolest thing about this figure is the flight yoke, which plugs into the Naboo Fighter so Anakin has something to hold on to when he sits inside the vehicle. It was a rare example of early synergy between products, and it made you feel good about owning both products. It's a good figure to get if you own the vehicle, but if you don't, well, this Anakin is no better than any other.

Collector's Notes: As an end-of-the-line figure, this figure appeared, disappeared, and then reappeared on mega-clearance. For two bucks, he sold quickly, but fan burnout from the previous year didn't help movie the units so much as the insanely great price at that point. You should have no problems getting one for cheap... but why bother?