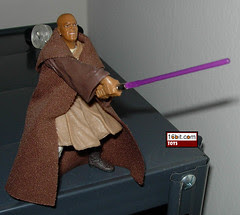 Bio: Realizing how far the Separatist conflict has degenerated, Mace Windu decides the time has come for swift action. He personally leads a Jedi battalion to Geonosis in an urgent rescue attempt, where he must put aside his diplomatic stance and call upon his finely honed Jedi fighting skills in battle. (Taken from the figure's cardback.)

Commentary: Behold, another of Hasbro's grand experiments! Mace Windu isn't a normal action figure-- far from it. The figure has a metal rod going through it, covered by his robes. On one side is a lightsaber, on the other, a joystick. Since his arms are soft plastic, you can basically play with this figure like a puppet-- he can twist and turn his arms to fight, to block shots, or to point at things. I'm somewhat worried it might fall apart over time, but as a new item, it looks good and it's loads of fun to play with, and it has one of the better (but certainly not the best) Samuel L. Jackson head. There's very little meaningful articulation on this figure, but the figure in its default pose looks pretty great, and it's a lot of fun to play with-- so get one for your kids, or for yourself maybe if you like such things.

Collector's Notes: Originally, the figure was going to have a plastic cloak, but it actually came out with a cloth one. Samples of the plastic coat got out on eBay as unpainted test shots, and I got one in my collection. It's pretty cool.