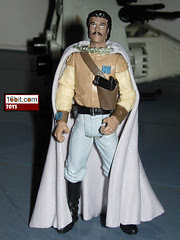 Bio: After the daring rescue of Han Solo from Jabba the Hutt, Calrissian became a General in the Alliance Forces. He volunteered to spearhead the starfighter attack on the second Death Star while Admiral Ackbar led the capital ships. When the Death Star proved operational, Ackbar was ready to retreat. Instead, Calrissian commanded the Alliance Fleet to engage the Imperial Fleet at point blank range, offering limited protection from the Death Star's massive superlaser weapon. Lando led the starfighters into the station's incomplete superstructure, striking the station's reactor core with a volley of concussion missiles that caused it to explode. (Taken from the figure's cardback.)

Commentary: When the new line started up, one of the first things fans clamored for were remakes of all the original Power of the Force figures from 1984 and 1985-- and we're still waiting on some of them. However others, like Lando Calrissian as a Rebel General/Pilot, have been made twice. This is the second release, and easily the best-- but, I daresay, not as good as the vintage figure. (That one had a cloth cape and could sit easily in a vehicle.) The costume here is replicated well, with the yellow striped pants, the shirt-under-the-shirt, the cape, a working holster on his chest (the first in Star Wars toys if I'm not mistaken), and all that stuff. His cape is removable, and while he has the standard articulation, Hasbro gave him extra joints on the arms for increased mobility. Well, the right arm, anyway. Unless Hasbro does a "vintage"-style remake of this one, which I seriously doubt given sales of the 2004 Lando Vintage figure and the 2007 Vintage line as a whole, odds are this will always be the best modern Lando General figure you can get. The likeness is good, the costume is decent, really all that's left is better articulation and soft goods. Since there's room for improvement, I have no doubt some of you will hold out even though this figure definitely falls under the umbrella of "good enough." I like it.

Collector's Notes: This figure was released in Spring 2004 on a blue, Saga-style cardback. Later in the year he was far more common when released on the Original Trilogy Collection packaging, which, we should note, looks totally awesome. The figures are identical.