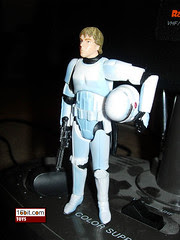 Bio: Luke, Han, and Chewbacca have rescued Princess Leia - but now they have to escape from the Death Star! After being hunted by stormtroopers and narrowly escaping a crushing end in a garbage masher, the four are reunited with the droids and nearing the safety of the Millennium Falcon. But tragedy looms as they watch Darth Vader and Ben Kenobi face each other in a lightsaber duel to the death! (Taken from Hasbro's press materials.)

Commentary: When Hasbro first revealed a new Stormtrooper body with a human head on it, it seemed a foregone conclusion that we'd get Luke Skywalker in Stormtrooper Disguise, and we did-- in this weird comic book coloring. A movie version of the mold, which was actually retooled in a few places, wouldn't see release until 2009.

This particular figure is essentially the old Vintage Original Trilogy Collection Stormtrooper, but with a retooled neck, a new head, and a helmet. In short, it's basically the comic pack Han Solo but seemingly just a smidgen shorter with a slightly different "shadow" pattern. The fact that it's super articulated isn't enough for some fans, but the real appeal from these Marvel-themed comic packs is that this is essentially a wacky pop-art, urban vinyl, quasi-bootleg redeco of a popular figure. If you had a case of these on your wall, it'd look like some strange toy art installation. As such, there's no real reason for fans of movie figures to get these unless you can really appreciate something weird, as these certainly qualify. I'd almost suggest only buying comic packs like these to new fans, as it's a much smaller sub-collection of product and it has a unique look. Plus you can easily "complete" the set, as very few Marvel sets were made so far. (Although I guess it could go up to 107, plus annuals, plus the ROTJ adaptations, plus the Ewoks/Droids books... so it's up to you.)

Collector's Notes: This figure is back in stores in the red packaging after previously having been released as a 30th Anniversary Collection comic pack. However, it is the other variation, which looks significantly different than this one. Different enough to constitute a new figure. This release has blue "shadows," the second drops all the blue and looks like a normal Stormtrooper with red eyes.

I actually liked this figure. I had less a problem with comic coloring than I did the use of older, less articulated molds.

I want a purple suit Marvel Comics Bossk, the VOTC one.