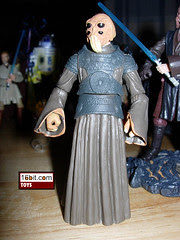 Bio: Senator Po Nudo pledges his people's allegiance to the Confederacy of Independence Systems and joins the Separatist Council. At the end of the Clone Wars, Palpatine sends Vader to eliminate the council members when they become unneccessary to his plans. (Taken from the figure's cardback.)

Commentary: After years of immense popularity, Star Wars fans eventually run out of things to ask for of any real significance. As a result, small factions of fans start to ask for things and sometimes it gives the appearance of the fans at large wanting them. I don't think this is usually the case. Po Nudo's release seems a little empty because nobody really seems to be excited for it. His arms are super-articulated, and he has joints at the neck and waist. And that's it. There's really nothing stunning about this figure aside from the fact it's the first 21st-century interpretation of his species as an action figure, which means his tusks look less like a baby's bottom and he has an extra pair of eyes to look at you with, as if asking "why do I exist?" With no lines in the movie and no role to speak of, this figure exists for one purpose: to stand on your shelf and collect dust. Surprisingly, he did well, but this was likely in part due to his extremely short shipping window in early 2008.

So what you have here is a salt shaker with arms, really. He can stand just fine but won't be sitting much, and is on the short list of figures that I feel probably could never have come out and wouldn't have been missed. It's not bad, just so unremarkable and not fun that it almost seems like the only reason it was produced was that Hasbro figured out how many people out there will buy absolutely anything, myself included.

Collector's Notes: Not rare, not common. If you want one, get one, but it's not going to be a lot of fun once you get it home, unless you're a huge separatist fan and have a shelf to prove it. A gun or some sort of battle-damage feature might have been nice, but as it is this figure is likely only to appeal to collectors and a small number of kids. (As a lot of kids see certain figures and latch on to them, which I say having been one of those kids.)

Email ThisBlogThis!Share to TwitterShare to FacebookShare to Pinterest
Labels: Revenge of the Sith, Separatists, TAC

I actually love this figure. No idea why especially since it pisses me off as a bit of an OT purist to think that this is supposed to be good ol' Walrus Man's species! Not!