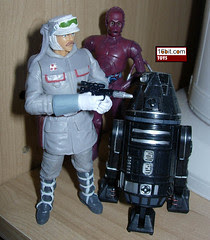 Commentary: You really can't have enough troops-- even if a Rebel Trooper is really just a repaint of Major Derlin. By taking the 2006 figure and recoloring the outfit, Hasbro gave us all a figure that, while probably not our first choice to be made, wasn't a real problem. (As I get annoyed when I buy a gift set and the figures are identical to those I have. Repaint it, and I'm pretty happy.) As a repaint, there isn't much to say here-- he has the same 10 points of articulation as Major Derlin, and if you have never seen the figures side-by-side, you might mistake one for the other pretty easily. So it's not all that different, but it will add a distinctive look to your ever-growing collection. Oh, and he can't sit. Gotta love those extra plastic pieces around the waist Hasbro enjoys using so much.

Collector's Notes: As a nifty quickie repaint, it wasn't too shabby for army builders and was a great part of a larger set. Many Targets sold through the Battle of Hoth Ultimate Battle Pack before the clearances kicked in, and with good cause-- even at $50, it was quite a deal. As such, this particular figure has been out of circulation for some time, and there are presently no known plans for a reissue.

Email ThisBlogThis!Share to TwitterShare to FacebookShare to Pinterest
Labels: Exclusive, Rebellion, TAC, The Empire Strikes Back

No mention of Cliff Claven?