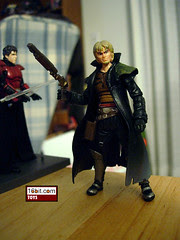 Bio: Years ago, when the Sith attacked the Jedi at Ossus, Cade Skywalker disappeared in a fiery blast. Everyone believes he's dead except Wolf Sazen. And it turns out, Cade's former Jedi Master is right. Cade is now a disillusioned bounty hunter and pirate who carefully hides his true identity from everyone. But through a series of circumstances, Cade must face his past - and battle the ruthless Darth Talon, the Emperor's newly chosen assassin. (Taken from the figure's cardback. Oh, and he's a recreational drug user, the package left that off.)

Commentary: The Legacy comic is a unique one-- it combines fan favorite elements from three decades worth of Expanded Universe materials. Most characters have relationships (or are) existing characters, and sometimes it feels a little forced. No matter your feelings on the comic (I think it's great), Cade Skywalker is a pretty good figure in its own right. The articulation is good, the detail is good, he has a big goofy gun, and it fits in his holster. On paper, it's great. In plastic, he's pretty good.

Hasbro seems to have nailed the costume. He has a shirt that looks like Mandalorian armor. He's got a big black coat because, I suppose, someone really liked The Matrix. His pants look like those of Darth Vader, only exaggerated slightly. It really does look like it stepped right off the comic page. As a fan of the comic, it's easy to like this release. He has a lot of personality in his plastic person, but the one place it gets weird is his head. His eyes seem a little too wide, his head a little too round. His hair is often portrayed as looking a little dirtier and messier, and his scruff looks a little bit more like Shaggy of Scooby-Doo fame. He almost looks too clean, but he's still a lot of fun to mess with. After all, a super articulated action figure with a big cloak or coat allows for a variety of fun action Jedi kick poses! Seriously, he's a lot of fun to mess with. It's just that I wish his head was just slightly better. (I'm glad they didn't forget the earrings.)

Collector's Notes: Despite Hasbro saying otherwise, reports have surfaced that show some figures do have a lightsaber and others don't-- as such, you may want to hold off on making the purchase until you see one with the weapons included. Also, my Cade figure had his belt on backward, you may wish to swivel it around.

My Cade came with a lightsaber and the "rifle" was in his holster. See pic attached. gargan123 in kansas city.