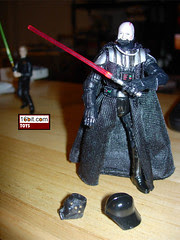 Bio: As has been the custom of the Jedi and the Sith for many centuries, Vader uses a meditation chamber to enhance his powers. Within this specially pressurized, hyperbaric enclosure, the Sith Lord is able to remove his mask briefly and still be able to breathe. (Taken from the figure's cardback.)

Commentary: As one of Hasbro's best selling figures, Darth Vader is in constant need of refreshing. You can't sell the same figure forever, especially not in an era where fans will rebuy the same product if it's sufficiently changed from time to time. I frequently invoke the phrase "just different enough to make you mad" when describing Hasbro's new and barely altered releases, and this figure is one of the finest examples of that you could ever see. The actual figure is based on the 2005 Evolutions Darth Vader, which was reissued in early 2008, and was changed slightly with a glued-down helmet for the 2007 Order 66 sets. It's a wonderful figure and just a detail or two shy of being the best overall Darth Vader figure Hasbro could ever hope to make. As it stands, it's just merely one of the best for right now. I'd say that this figure that I hold in my hands as I type this is so good, if you only ever buy one Darth Vader figure, this is it. Until Hasbro adds more improvements.

So, what's different? It's all in his head-- the body is effectively the same except for how the lights on his torso are painted. The head is now molded in a flesh colored plastic which actually looks significantly better and more lifelike than previous releases. It brings out the dirt, grime, scarring, bruising, and blood much better than we've seen in the past, and if I didn't know better I'd almost think it was a brand new sculpt. (It isn't, is it?) Either way, it's good. The helmet itself is the other big departure. We've had removable helmets before, but this is the first time the dome can be separated from the facial part of the mask. As far as toy engineering goes, this is a fantastic feat which would have been unthinkable just a few years ago. From a collector perspective, it's basically a non-issue. OK, so the helmet comes apart. So what? It's the same action figure otherwise, so who cares?

It's really weird to say "who cares" about what is Hasbro's best Darth Vader yet. It's a stunning release, but it's not significantly different enough from previous releases for me to tell you to go buy it. If you don't have the previous releases, you absolutely need to get it-- otherwise, well, it's up to you. After playing with the helmet for two seconds, it's really no different from what you have.

Collector's Gripes: Since about 2003, it seems Hasbro has determined they could make a small change here and there, rather than overhaul a product, and multiply their sales as a result. As such, there's still a few changes to this figure which Hasbro has yet to implement. For example, there's no ball-jointed neck-- we got a Vader with such a joint with the white Darth Vader from the comic packs line in August 2008. There's no wire in his cape-- this is something we've seen in Batman figures and in Jedi robes, and it would allow his garment to be posed rather than hang limp. Finally, there's no lightsaber hilt or a place to plug it into his belt. This feature has only been incorporated once so far, and with any luck Hasbro will put all three of these features in a future incarnation of this mold or the next-generation super-articulated Darth Vader mold we figure they're developing in a bunker underneath a dormant volcano in New Mexico. (Oh, and they could add ball-jointed wrists and hips some day, but that's probably just being ridiculous.)

Collector's Notes: This is the first time a figure based on the Vader Evolutions body has been released on an individual package. At press time, the figure has only been seen with the R7-Z0 dome and third leg droid parts. The figure will come with other droid parts in the future. As to the * from above, I think the figure is meant to be from ROTJ, but here's the thing-- the description smells like The Empire Strikes Back. The cardback art is from Revenge of the Sith. But there's no damage markings on his arm from the final duel. So I'm just assuming it's Return of the Jedi as that's the only time we saw him take his mask off in two stages, and it's the movie from which the original body mold was said to be taken.

My biggest gripe in addition to yours, is the fact that his right hand cant hold the saber, and is not removable at the wrist. fix these. i can live without extra ball joints and wired capes easy. make the right hand perfect and removable so he can really be a ROTJ Vader.

The head is a new sculpt, not the Evolutions head. If you compare them together it's quite a bit smaller. Lots of variations on the head deco exist... ranging from "severely bruised" to "just a scratch" to "eggshell clean."

Wasn't this mold released on a single card in 2007 for the ANH Vader with Obi-Wan's cape? I know the head and upper torso are different, but it's essentially the same figure.