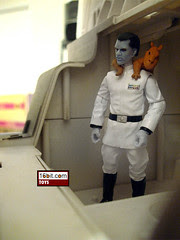 Commentary: While art has shown the character of Grand Admiral Thrawn in a few different costumes over the years, both action figures (including this one) show the high-ranking Imperial without the yellowish gold epaulets on his shoulders. Even though this super-articulated figure is pretty awesome, it'd be nice to see that. Or some sort of backpack for his little lizard friend to feed off of. But you can tell that from the picture.

Thrawn is an update to a figure from 1998, and for the most part he's pretty good. While it's easy to fault the figure for what they could have done, it's really best to just look at what it is they did give us. The good news is we have a modern sculpt, complete with 14 points of articulation, fantastic detail, a proper rank badge, and everything you would expect out of a decent individual action figure. Except for a blaster. The details are all pretty great, from the slick, shiny boots to the gloves. Oh right-- they sculpted his hands as gloves, you can see the wrinkles on them. The packaging even has his hands painted white, to match his gloves. And the figure itself? His gloves are the same color as his skin. Oops. Maybe we have a potential variant here, but it's more likely this will be the only way the figure is offered. It's not bad, it's just always a shame when a detail of some significance is painted incorrectly, like the snow clumps on Chewbacca or when Luke's gloved and flesh hands were swapped on a 2003 figure. It happens, and with as many figures as Hasbro produces, it's a wonder it doesn't happen more frequently.

The other detail that's something of a downer here is the boots. And keep in mind by picking on part of his boots and his hands, that means the rest of the figure is perfect-- one can only gush about a figure's greatness for so long, but it's easy to dwell on a minor hiccup for long periods of time. Due to the white plastic used for the uniform, much white plastic is exposed and left unpainted around the ball-jointed ankles. For once, it would have been better had Hasbro elected not to give the figure ankle articulation, or if they used black plastic to mold the feet. Other than that, it's pretty awesome-- the head is good, the uniform fits, the boots are glossy, and his little pal is based on the comic appearances. (Or close to them-- the ysalamir has two legs and a tail, not four legs and a tail like in some other art.)

Collector's Notes: In 1998, the first Thrawn figure was in short supply due to a transitional period in the line. Today, it should be widely available and it comes with a reprint of Heir to the Empire #1, which has some of the best Star Wars comic art in the entire Dark Horse run. This set should be added to your collection without question.