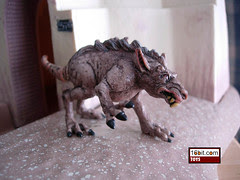 Bio: The womp rat was a large, omnivorous rodent native to Tatooine. It was widely considered to be a pest. They were slightly larger than two meters in size. There were three races of womp rats: ones that lived in Beggar's Canyon, ones that lived in the Jundland Wastes, and swamp womp rats. It was not unheard of for people to have domesticated womp rats as pets, but Luke Skywalker and his friends used to "bulls-eye" womp rats with stun blasts, while flying T-16 skyhoppers, for fun and target practice. (Stolen from Wookieepedia.)

Commentary: Over the years there have been numerous interpretations of the Womp Rat, from the various video games, comics, and so forth. I'm not entirely sure where this particular version's design came from, but here it is-- it's a toy. That makes it real in my book, and this ugly little rodent seems to combine elements of a few illustrations with the Lenny Gremlin from Gremlins 2: The New Batch. The strange mouth and teeth don't do much to make the figure look menacing, but they do manage to reduce the appearance of the creature's intelligence greatly. While some of the Womp Rats over the years have had sharp teeth, mean eyes, and a look that could terrify a future meal, this one just looks like he has been praised for learning to fasten his velcro sneakers. Odds are darker lip and ear colors might help make it look a little more menacing.

The creature has zero points of articulation and is posed fairly well. He looks like he's in some sort of action scene, perhaps exploring or poking around in a pile of garbage. It gives him enough personality to live in a diorama, but if you had a whole group of these things it's going to look pretty stupid. I wouldn't suggest going out of your way to get a lot of these things, but I guess you could have Boba Fett shoot one in the head outside a Cantina diorama or something. As it's a new creature-- and we get so few new creatures-- I'm glad I have it. I clearly overpaid for it, but I'm a toy collector. It won't be the last time.

Collector's Notes: This is the only new figural element in the gift set, with the Lars Homestead being the main draw-- the figures are more of the same. As such, if you're a long-time collector, you're essentially paying $50 for a rat and an igloo with a base made of the same materials as a Halloween mask circa 1979. Given I've bought weird and rare items on the secondary market at a premium price in the past, I'm used to paying more than something is really worth, but not for a new item. You may wish to consider not buying this one.

its funny that you sorta noticed i wasnt trying to make the womp rat menacing. Its sort of a funny idea, the only time theyre ever mentioned in the movies is when luke brags about shooting them. And, since luke is the protagonist, womp rats sort of take on an ugly better-off-dead persona in most depictions. so as not to sully a heroes rep? But ive always really liked ugly things, theyre like underdogs. in my dumb-luck and exciting temp job at hasbro, this is the one figure i got to make up on my own, and i got it on the 3rd day of the job, and i was still getting used to the medium. But i was thinking about what sort of stupefied thought would come to a womp rats mind with a young, bored skywalkers T-16 on the tattoine horizon. How he would raise his claw ineffectually as the stun blast went off. Having grown up with pitbulls, im sort of fond of dumb, misunderstood lugs.

and im sure thats more than anyone ever, ever wanted to know about that figurine.But you must understand, my one chance at being a little part of sci fi, the fact that i got a whole write up on the net, or that message boards are talking, even negative things, it means the world to me. thanks you!