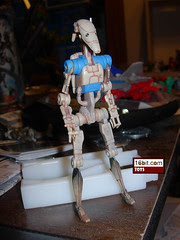 Bio: Battle droids swarm into combat on Geonosis, a vast army under the control of the Separatists. Armed with blaster rifles, the battle droids face the clone troopers in combat: two forces both programmed to act with unwavering loyalty toward their creators. (Taken from the figure's box.)

Commentary: While initially a popular troop builder, the Battle Droid has lost a lot of favor with fans since Hasbro developed the Clone Trooper. Even though there are numerous ranks, recolors, and varieties to crank out, only a few have been immortalized as toys. Fewer still are truly authentic to the movie, but that doesn't mean they aren't any good. This version is interesting because it takes the (arguably) outdated 1998 Battle Droid mold, and gives it the best paint job ever seen for this trooper. Seriously, Hasbro has never done nicer work on a Battle Droid action figure's paint, at least not yet. The extra detail in the figure's grooves really brings it to life, and the bright blue "pilot" marks are a nice touch. The backpack is given the same treatment, and really the only thing this figure doesn't have is a blaster. This, of course, makes sense because his hands were sculpted especially to fit on the handle bars of a STAP, and cannot accept a gun without some modification involving scissors. This is something I'd not advise you to try. I don't think a lot of fans are going to be giddy about buying yet another Battle Droid in 2008, especially after we've seen countless new molds with more precise sculpting and even animated styling. This one may not seem like much, but I can say it's currently my favorite one to look at. Until Hasbro gets around to repainting its other molds to look this good, as far as I'm concerned, this is the best Battle Droid your money can buy... despite not having a gun. Oh, and it has nine points of articulation. Again, this may not sound like much, but in 1998 it was a really big deal.

Collector's Notes: Not only is this figure a repaint of an early prequel mold, it's a repaint of the first prequel mold. The original Battle Droid was packaged with a STAP vehicle and sold in 1998 as a "Sneak Peek" item roughly six months prior to the theatrical release of The Phantom Menace. As fun was no longer in their sights, Hasbro released its Episode II Sneak Preview items just a couple of months early, ditto Revenge of the Sith. Also, this figure came two in a set, with two STAPs and a Super Battle Droid. This made it one of very few Toys "R" Us exclusives that were an exceptionally good value for the money.