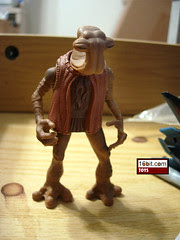 Bio: Momaw Nadon was an Ithorian. He was exiled from his homeworld, Ithor, after he revealed secrets of Itorian agricultural technology to the Galactic Empire. He spent much of his exile on Tatooine, and was seen in Chalmun's Cantina when Luke Skywalker and Obi-wan Kenobi came searching for passage to Alderaan. (Stolen from Wookieepedia.)

Commentary: The original Hammerhead from 1979 had basically all the same elements as this figure, except the gun was smaller and his outfit was this one-piece blue thing. In 1997, Kenner gave it another try with Momaw Nadon. This figure seems to be based mostly on Ron Cobb's concept art rather than what we saw in the movie, which I think makes it all the more interesting. Usually figures from the 1990s just become old and dated, this is a rare instance of a character being a concept figure first. Because of this, it's probably worth picking up for any concept toy shelves you may have set up.

With only 6 points of articulation, the figure itself is really no better or worse than future releases. He can sit, stand, and hold his giant freaking gun (not shown). His garment is removable, revealing another sculpted costume underneath which is slightly more true to the film. There's not a lot of detail on this particular alien, but then again, it's not like the costume was incredibly ornate either. It was good for its time, and it's still pretty neat today. I'd suggest getting it because it's such a neat curiosity, but if you already have a few Ithorians in your collection you may not want to add one more.

Collector's Notes: A favorite with kids and collectors, new versions of Momaw Nadon would come every few years-- a figure with a revised body and repainted limbs came out in 2002, and a total resculpt was released in 2006. A newly tooled Jedi of the same species, Roron Corobb, came out in 2007. None of which are particularly rare, and each release of Momaw Nadon is notable in that the designers changed the costume quite a bit. The 2006 release seems to be the truest to the movie for now.

A good figure, but holy smokes back in 1996 if you looked up the word "pegwarmer" in the dictionary you'd see this guy.

I still have collecting nightmares of rounding the corner to the SW aisle at Toys 'R Us and finding nothing but row after row of this charlie. Ah, the good old days...