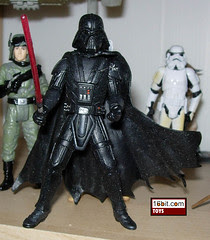 Bio: The Infinities series explores tantalizing "what if" stories about what might have happened to Star Wars characters if events had happened differently. In this tale, Princess Leia fulfills Luke Skywalker's dying words, "Find master Yoda... Train as a Jedi... Go to Dagobah." On the jungle world of Dagobah, Leia is shocked to learn her father is the evil Darth Vader. Under the tutelage, Leia becomes a skilled Jedi but faces a final trial: battle her father in a lightsabaer duel and resist his attempts to turn her to the dark side. (Taken from the figure's cardback.)

Commentary: Some have said that Darth Vader is the stuff nightmares are made of, but I think this is the first time we're actually seeing the Sith Lord as seen in an actual nightmare. Specifically, his own. Through some Force-induced hallucinations, Darth Vader appears more twisted than ever in the final issue of The Empire Strikes Back Infinities, which is included with this figure. While he isn't super-articulated, this figure manages to mesh movie and concept designs into a figure that-- if you ask me-- is more striking and cooler than the McQuarrie Concept figure. (Well, except for it not having a gun.) He has a removable helmet which, underneath, has an older, fatter version of Hayden Christensen-- complete with hair. (This is a dream-based figure, you see.) With ball-jointed elbows and ankles, the figure would have difficulty meeting some fans exacting requests for super articulation, but normal hips, shoulders, wrists, waist, and neck joints won't hurt you. Well, I assume they won't. I don't know how you play with your toys. Due to the non-removable plastic cape, he won't be doing much sitting. There's still a decent amount of play value here as he can hold his lightsaber and you can rip off a piece of his chest armor to simulate damage. Fun, eh? If you have a few Darth Vader figures, add one more to your collection and pick this one up.

Collector's Notes: Packaged with a nifty Jedi Training Leia, this set is on its way out of stores. If you've been holding off, get your butt to retail and pick up one while you can.

It's an awesome figure, isn't it? You know, Adam, if you're really careful, you can take the cape off to let his sit...

It's funny you say he looks like a fatter Hayden underneath. I always just saw it as some nebulous Anakin concept, one that actually jived better with my own youthful expectations than the casting choice that was eventually made. Am I the only one who figured Anakin was a bit older when he became Vader even if it would go a bit beyond logic? A bit more battle hardened at least? I don't know, I just always pictured an older Kenobi and Skywalker running around battling evil until something happened that lead him astray. Anyway, yeah I like this figure a lot too and am pretty amazed he even got made.