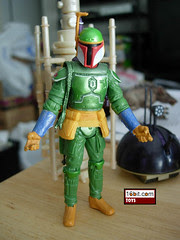 Bio: Princess Leia is captured by slavers while searching for Dengar, a bounty hunter with information that can help her save Han Solo. It looks like all is lost for Leia, until her new Mandalorian friend Fenn Shysa launches a daring raid to rescue her and his boyhood friend Tobbi Dala, who is also a prisoner of the slavers. But before the day is done, there will be death and destruction in the city of bones. (Taken from the figure's cardback.)

Commentary: Lucasfilm and Hasbro have made previous few references to or products from the Marvel Star Wars comic book series. Maybe this is one of the reasons I'm so enamored with Tobbi Dala. I haven't been able to put him down since I got him. Typically, I get a new figure, and put it away in a box or on a shelf after a few days. Tobbi (And Fenn Shysa) have managed to stay out, despite being garish repaints of two figures I already have and don't like all that much, but with new heads. Still, it's what they represent that's probably the most fun, and if you don't know what they represent you may find them entertaining for other reasons.

One of the biggest (and most underused) characters in the 1980s was Boba Fett. Introduced before The Empire Strikes Back and killed in Return of the Jedi, the character went virtually unexplored except for multiple "first meeting" tales and a flashback or two. His origin-- or rather, one of them-- was told in Marvel Star Wars #68, and apparently at the time he was going to be a Mandalorian Protector-- along with Tobbi Dala and Fenn Shysa. Marvel being a comic book publisher from the 1980s simplified many of the designs (including Boba Fett) for printing purposes, and rather than make them "realistic," Hasbro decided to go with an exaggerated look taken straight from the comics, with one notable exception. While the brightly colored armor and gloves ring true, one you take the helmet off, Dala's head is bald in the comics. The action figure has a very slight and patchy layer of thin hair. His head isn't anything too remarkable-- if anything, he looks older than it would seem the comic intended. Still, he's pretty grizzled, and that works for me.

Our hero's armor is really slick in that Hasbro decided to have fun with it. It seems less like a fearsome warrior and more like one of the boombox toting Mandalorians you might see at a comic or sci-fi convention passing out mix tapes. The helmet is this really bright metallic green, as is the chest armor. The gloves, feet, and belt are a superbly bright orange, and his body suit is also a very spiffy bright green. Were it easier to do I'd totally dress up as this guy at a show, except maybe wear a giant clock around my neck. He has unique Mandalorian symbols on his shoulders, a holster for his pistol (recycled from Boba Fett), and 14 points of articulation. Oh, and no cape-- the hole is there, they just didn't include a cloth piece. His rocket pack accessory is also notable in that he looks better without it. It's purple with white highlights, and really doesn't look good with the rest of the outfit.

But, as you can see, it looks a little weird-- this is a figure that fell through a time warp from 27 years ago. Hasbro did a fine job with it, and I like it so much I want a "Mandalorian Protector" Marvel deco Boba Fett to go with it. Seriously. I'm willing to pay. Since getting this figure I've dug out a bunch of Mini-Rigs (the old Kenner-designed vehicles sold from 1980-1985) as the style seems to mesh here, and you know what? I'm really jonesing for some new Hasbro-designed vehicles. Not like the Cruisemissile Trooper, but fully-enclosed one-man ships like the ISP-6, Side Gunner, or the McQuarrie Concept Airspeeder from 1998. All were fun, and really, now would be a great time to do some new ones. (All Hasbro has to do to guarantee a sale is to pack a clone or robot repaint in each one.) I'm quite pleased Hasbro is revisiting these Marvel issues and I really, really hope they continue to do so as the line continues.

Collector's Notes: He's new, so you'll probably just now start to find him if you haven't already. If you read the old Marvel series and don't have one, you're doing yourself a disservice. if you don't know anything about the old Marvel comics, this is a good set to get-- it's an amusing two-part story that, while not necessarily canon these days, is a fun read.