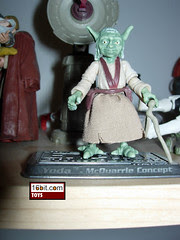 Bio: The diminutive Yoda appears leaner and more whimsical than he will ultimately appear in the films yet still exudes mystical strength. (Taken from the figure's cardback.)

Commentary: In 2007, Hasbro stunned figure fans by releasing this Yoda as part of an exclusive McQuarrie concept-based set of action figures for a mere fifteen bucks. As one of the saga's most famous characters, you can bet there are several astounding pieces of art from the conceptual design files, from various goblins to what looks vaguely like Santa Claus. Playing it safe, Hasbro went with one of the designs which looked a lot like the final design. This is both good and bad, good because you don't have to explain to your friends who he is, and bad because it's just not all that distinctive. The Boba Fett figure is this great and different design. Even Obi-Wan Kenobi is a real departure from the final character. Yoda, well, it's Yoda.

The figure itself isn't at all bad, and actually sets a new standard for articulation in Yoda toys. If anything, it'd be nice to see a regular movie Yoda figure this nicely designed. This is the first-ever Yoda figure with ball jointed elbows, plus he has ballish shoulders, regular hips, a waist, a neck joint, and wrist joints. Even the 2004 Vintage release wasn't this good. The figure also has cloth elements to his costume, allowing him to sit. Again, this is pretty fantastic. The design itself is a weird mishmash of original McQuarrie art and some vaguely Kennerish elements from the original toy, so while it's not exactly Ralph's baby, it's pretty close. The longer hair looks a little goofy, and the facial expression looks more Muppet-esque. There are far fewer wrinkles in his face than in the art, but at this size, that's OK. For fans of Yoda looking for something different, this is a fantastic figure. Unfortunately, it isn't too close to its inspiration, nor is it easy to find. For a unique design, it's quite possible the best Hasbro could have done with 2007's sculpting methods, especially given his spindly little legs.

The only way this figure could be more interesting would have been if Hasbro selected a more unique design. And there were many of those to be seen. Although, surprisingly, I had a hard time finding links of most of them to show you, so pick up The Empire Strikes Back Sketchbook or The Art of The Empire Strikes Back if you have the means.

Collector's Notes: A convention exclusive, this popular figure hasn't been reissued in any form-- nor is he expected to be. As such, you're on your own here.