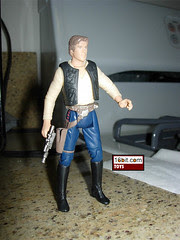 Bio: Inside Mos Eisley's cantina, Han Solo just negotiated a lucrative deal to transport two men to Alderaan - enough to pay off his debt to crimelord Jabba the Hutt. But it's too late: bounty hunter Greedo has come to collect - though all the Rodian gets is a shot to the chest from Solo's blaster. (Taken from the figure's cardback.)

Commentary: It's always neat to go back and look at the figures that, at one point, were considered amazing marvels of Hasbro's toy-making skills. This Han Solo was once easily the finest toy in the entire line, given that it had jointed knees, extra arm articulation, and a working holster. These things were unheard of in 1999 Star Wars figures, so just some extra features alone were enough to get fans excited. What's better still are that the likeness improved, he was proportioned a little more realistically, and could sit. (Sitting, of course, being very important.) The figure was so good Hasbro reissued it several times. Never being one to shy away from getting the most out of a design, the figure was repackaged, packed with vehicles, and even boxed with a plastic tumbler. If you collect every packaging variant, you may own nearly 10 of this one.

While the figure has since been made obsolete by the 2004 "Vintage" Han Solo, this one still serves a purpose. Mostly that he can sit-- the holster of most newer Han Solo figures was sculpted separately from the figure's legs, and they're only slightly flexible. Given that the belts are part of his legs, this figure has absolutely no problems sitting in your vehicles, and because of this he's still potentially the best toy Han Solo figure you can get from the original film. I like mine plenty, even though the newer ones may have more articulation, better sculpts, and improved likenesses.

Collector's Notes: You can probably get this figure for a buck or two because it has been rereleased so many times by now. It isn't astounding, but it's a look into how Hasbro did things before the introduction of the super-articulated figure. It's pretty remarkable for its day. Unlike some recent figures, doesn't easily fall apart.