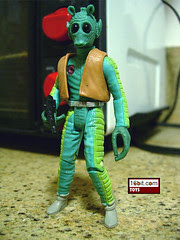 Bio: Greedo is a bounty hunter hired by Jabba the Hutt to find Han Solo and get the money Han owed him from a botched smuggling run. Greedo finds Han in the Mos Eisley cantina and demands the money. When Han says he doesn't have it, they both reach for their blasters to end the confrontation. (Taken from the figure's cardback.)

Commentary: "Just different enough to make you mad" is a recurring theme in Star Wars since around 2004. As the line progresses, it's much more difficult to tell the difference between a reissue and a repaint-- how different does it need to be to qualify as "new"? This Greedo is new enough as it comes on an awesome cardback and is, well, mostly different. At the time it could be said it was the best Greedo money could buy, but today it's a little tougher to pick a best one as the 2006 release had a funky cloth vest that wasn't necessarily a step forward. Anyway, this one is pretty good because he has an excellent paint job, a good sculpt, and can sit. That's really what you want out of a Greedo, and here you'll find it. Without remolding the figure, this is about as good as the figure can look-- so the third rerelease was the charm here. Some fans may balk at the "lack" of articulation, but 8 points is actually pretty good for the mold's day (1999-2004) and it's not like he did much other than stand, sit, and get shot. As far as packaged Greedo figures go, I'd say this is probably the one to get. It isn't too expensive, it has a great backdrop, and above all else, it looks cool.

Collector's Notes: This was the last (it seems) use of this mold. The first release was in 1999 as a basic carded figure with a CommTech chip and a peachy colored vest. The second in 2002 was similar to this one, but had differently colored shoes and slightly different deco plus a cantina bar section, and no blaster. Hasbro, as you can see, still hasn't gotten the eyes right. The most obvious way to tell the OTC release from the others is that the wound under his vest is red, while the others are more blackened.

You know, I was completely unaware this figure had a wound! Where have I been?