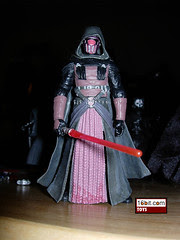 Bio: In the days of the Old Republic, thousands of years before the rise of Darth Vader, a Jedi named Revan falls to the dark side. While chasing Mandalorian raiders with his Jedi companion Malak, Revan is consumed by destructive Sith energies on the planet Malachor V. He becomes a Sith Lord and lures Malak to the dark side as well, as his Sith apprentice. (Taken from the figure's cardback.)

Commentary: After years of waiting, does Hasbro's Darth Revan figure-- a Fan's Choice winner-- have what it takes to be awesome? I guess, sort of. After winning rounds of voting through a ToyFare Magazine-sponsored poll, fans were allowed to peek in on his development. The good news is that he's here-- he's real. The bad news is that as toys go, he isn't so great. The worse news is that it doesn't seem to matter because he sold so gosh darned well, proving that if fans are genuinely interested in the character, that character trumps quality by a huge leap.

Revan is a decent figure-- once you distance yourself from being concerned with the "action" part, that is. His arms have ball-jointed shoulders and elbows, he has normal hips and wrists, a ball-jointed head, and a normal waist. His Sith robes prevent the legs from moving much. If you look at this release as a really great tiny statue, you're going to like it a whole lot more. He can't sit or do most things you'd want a toy to do, but it seems to me the audience for this figure would be a group of older fans who will have him stand around on a desk, and the chances of him piloting an X-wing are minimal at best.

Hasbro's sculptors did a good job, as we're basically used to. The mask is there, and once you take off the hood you can see the somewhat battered human head of this character. (But not the face.) Revan's robes are pretty nicely sculpted, as part of the lower "skirt" actually extends up and acts as a sort of a belt over the chest armor. This doesn't feel like one of Hasbro's normal figures, and it wouldn't surprise me if they used it as a bit of an experimental platform for the line. There's certainly room for more paint detail, but the various ridges, textures, buckles, and other bits are all here. He doesn't disappoint, but then again, I had extremely low expectations in the first place. It's also worth noting his lightsaber's hilt does not match the hilt of the lightsaber hilt, if you catch my meaning.

Collector's Notes: This figure was pretty popular, and produced for a very brief time. If you blinked, you missed him-- and now you're going to pay accordingly. No reissue is planned at this time, but it seems to make sense to bring him back as a pre-order bonus for the KOTOR-themed MMO or something else. Sith Lords are an easy sell-- I'm sure Hasbro could sell a new one they made up monthly if they really wanted to do so. Given that this one is from a popular Xbox game, it's not at all surprising that collectors actually want this figure a great deal.