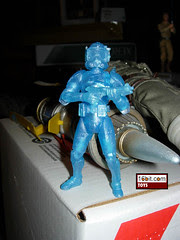 Bio: The battle-hardened Cody has fought beside General Kenobi many times in the Clone Wars, so it is no surprise that his 212th Attack Battalion is sent to Utapau to once more serve his friend. But this commander soon receives a secret communiqué from a far more sinister leader and quickly changes his allegiance. (Taken from the figure's cardback.)

Commentary: Fans love clones, and apparently paint isn't a requirement for figures like this Holographic Clone Commander Cody to prove successful. Mostly clear blue plastic, this figure has a few opaque pins in his joints but is pretty transparent. I was pretty enamored with this figure when it first came out because of the removable helmet. "If the helmet is clear," I thought, "can't you see his face through it?" The answer is "sorta, but not really." Not a lot of light makes it in the helmet, so it isn't like it's going to be really obvious that you can kind of see where his eyes are. The figure itself is-- as far as I can tell-- identical to the non-holographic version from earlier in 2006, which means it's almost super perfect. (He's a little short.) The fun value of a clear blue repaint is pretty low, but if you're collecting them all at least it looks different enough from other figures you own. At this time, it's the only clone figure to get the holographic treatment, so in that respect it's pretty distinctive.

I don't regret buying it-- that's something I think I'm going to be using to rate figures more often-- but it doesn't mean you're going to have a lot of fun with it. It's neat enough, but once you write about it and take a picture of it, where does he go? It's not like there's a playset which can incorporate him, or a little pad to stand on in the AT-TE to look like a projection. Since buying him nearly two years ago, he's lived in a box. I assume yours will as well if you make the purchase.

Collector's Notes: This figure may have represented one of the quickest turnarounds from Hasbro introducing a regular mold to selling a clear blue repaint. (Quickest holographic repaint, period, being Emperor Palpatine in 2005.) It was fairly popular, surprisingly, and now it's going to take some work to find one. Also, he was one of a whopping 4 holographic figures to appear in the basic The Saga Collection line. It seems that since then, Hasbro is trying to limit production of these clear blue figures to one or two per year. I also feel like I should start a pool on how long before Hasbro cranks out an animated The Clone Wars Cody.