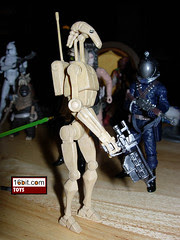 Bio: Battle droids are the perfect soldiers in battle - programmed to fight without hesitation and deployed in vast numbers that overwhelm opponents. Individually, though, their limited cognitive ability makes them vulnerable when up against the daring recklessness of Anakin Skywalker and the agile Ahsoka Tano; the two skilled Jedi can easily outwit and outmaneuver these mechanized fighters. (Taken from the figure's cardback.)

Commentary: So these "special" troopers aren't so smart-- I guess that's pretty common knowledge by now. The Battle Droid seems to be a staple in the action figure line, one of few characters introduced in the first prequel which seems to consistently perform at retail. And is also repainted many, many times. This new mold hasn't yet seen a redeco, but we all know it's a matter of time. With the new animated style, Hasbro gave him thicker limbs which should better hold up to gravity. Previous droids had a bad habit of bending and falling over, but this one looks more stable. We'll see how that goes. The sculpt is actually pretty good, but the weird thing is that when combined with its paint job it almost looks wooden to me. It's nice that it's so different visually, but it's also a little strange. The figure's head seems smaller than it should be, too, which adds to its unique look.

With articulation at the waist (a first!), neck, shoulders, hips, and elbows, this is a pretty decent figure. If it had knees, it would be the most articulated version of the character ever, but the figure really only needs more articulation at the elbow. With his standard gun and firing gun, it can be a little tricky to get both hands on the weapon. Extra articulation would have helped immensely, and after last year's Super Battle Droid it might not be out of the question for Hasbro to be able to do this. As few Battle Droids sport elbow joints and none have a waist joint, this figure stands out as being pretty unique in terms of play value. I'd say get one, but hold off on troop building until you see if you really like it or not.

Collector's Notes: Seemingly a speedy seller, this figure is flying off the pegs. I wouldn't suggest paying a premium for it as you can practically smell all the Battle Packs it will be in later this year or next year.

Nice review! Initially I held off on buying this guy as hey, who doesn't already have at least a dozen Battle Droids? But the slightly bulkier redesign works nicely, and I loved these guys in the movie. Also at present he holds the dubious distinction of being the only Clone Wars Separatist figure that stands.

A good review and you nail pretty much all the reasons I would consider buying it but my final verdict so far is a bit "whatever" or "meh". I'm not into the animated figures now that I've seen the film...and yes I saw it in the cinema so I at least got off my a$$ and gave it a chance. I even bought some clones, R2, Anakin and Kenobi before finding out I wasn't going to like it. But if it fits in with the non-animated line nicely and is sturdier I probably will buy it in battle pack form or re-release down the road. I know you don't exactly do updates to your FOD column but if at some point down the road you find a way to work a final verdict on its sturdiness factor into another figure's review that would be awesome!