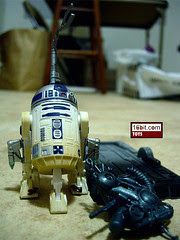 Bio: The fiesty droid R2-D2 is assigned to serve Anakin Skywalker in the Clone Wars. Seated in the droid socket of Anakin's Jedi starfighter, R2-D2 is witness to dramatic events that will change the galaxy. (Taken from the figure's cardback.)

Commentary: One of the biggest challenges at Hasbro must be making new versions of R2-D2 which a) are different enough to look new, and b) will not hurt the sales of future new R2-D2 action figures. This figure was a bit of a departure from previous models in that it does lots of things rather than just one. Typically, a sound chip or a single arm accessory was enough for a new figure. This time Hasbro incorporated removable rockets, an articulated (and removable) arm that comes out of his head, and some added accessories. It sports one of the best sculpts Hasbro has done for R2-D2, but it really doesn't fit in with most of the Astromechs the company has produced due to the many slight variations in its design, from the oddly placed dirty paint to the unusually placed third leg. It's a fun little toy, and it's totally worth getting if you play with your figures. It just isn't much to look at compared to other releases if you're a droid collector... but if this is the only R2-D2 you'll ever buy, it's actually not at all bad. At least it can do things, which is more than one can say about a lot of figures.

Collector's Notes: This mold has never, ever been reused to make another droid, and pretty much acts as another one-timer. It was repackaged in 2006 in the "Heroes & Villains" packaging, which I must say looks a heck of a lot cooler than the 2005 ROTS release. Due to the vast quantity of R2-D2 toys, they're all pretty forgettable... but this one certainly isn't terrible. It's just another R2-D2.