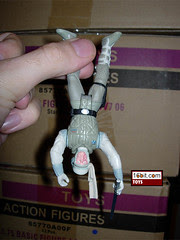 Bio: Luke Skywalker was a legendary soldier and Jedi who helped defeat the Galactic Empire and found the New Republic, as well as the New Jedi Order. A chance purchase of two droids, R2-D2 and C-3PO, led to him meeting Han Solo, Princess Leia Organa, and receiving Jedi training from Obi-Wan Kenobi. Skywalker later destroyed the first Death Star and joined the Rebel Alliance. (Stolen from Wookieepedia.)

Commentary: During the late 1990s, Kenner wasn't shy about cranking out lots of Luke Skywalker figures-- nearly 30 were made between 1995 and 1999. This particular version was one of three Hoth Luke figures released during that time period, and this one was notable because it was designed to hang upside-down. In theory, this is awesome-- but Kenner didn't make a cave to hang him from, which means there aren't many opportunities to show how neat that articulated scarf on his head truly is. (Unless you hold him up.) His sculpt and deco are about on par for 1998, but he did have the added distinction of featuring a bloodied face-- this was pretty unusual for Kenner, and made fans pretty excited at the time. Still, he's pretty beefy, his waist is tiny, and the articulation stands at a mere 7 points-- and that's counting the scarf. A new Hoth Luke was released in 2004 with designs to allow him to hang upside-down, and Hasbro widely included cave elements with Luke and a Wampa figure which allow you to recreate a scene from the movie. So as a first pass at a good concept, this is a neat figure, but new collectors really have no good reason to track it down.

Collector's Notes: While the figure is more or less disposable due to recent releases, it's pretty clever. The figure was packaged upside-down in the box, showing that the designers of Kenner had a good sense of humor. The Wampa and the Tauntaun with Han Solo were both quite difficult to find in 1998 because stores underordered the assortment of creatures, meaning some of them commanded premium pricing for quite some time. Thankfully, short attention spans prevailed and you can get this Wampa for a much lower price today.