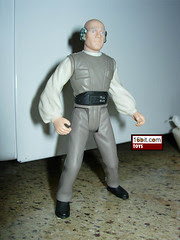 Bio: As the cyborg administrative assistant to Cloud City, Lobot made certain that Lando Calrissian and his Rebel companions would safely escape the Imperial occupied city. (Taken from the figure's cardback.)

Commentary: With one of the oddest poses in the entire line-- and that's saying something-- Lobot isn't all that bad. Sure, six points of articulation isn't too special today, but the figure is a great toy. The paint job is wonderful, the types of plastic used don't look cheap (or translucent), and it seems to hold all the detail the designers intended. He just looks like he's dancing, which doesn't help. Sure, he can sit, but his arms are so wide out that you might not be able to get the ship's canopy to close. In a way, it's a pretty tragic release-- it seems like every effort was made to make the quality of the figure extremely high, but none of that matters because he looks like he's dancing. In a way I really hate to reduce the figure to one glaring flaw, but it's hard to get past since it isn't representative of the film. The 2004 version is largely better, but the coloring on this 1998 release looks better if you ask me. It's just a little more lively... which I guess is sort of the theme here.

Collector's Notes: As part of the final "Collection 1" wave of Power of the Force 2 figures, Lobot was actually pretty scarce for a while. His price remained low because fans didn't view him as a must-have figure and they started asking for a resculpt almost immediately. A new version would come in 2004.

Email ThisBlogThis!Share to TwitterShare to FacebookShare to Pinterest
Labels: Cloud City, POTF2, The Empire Strikes Back