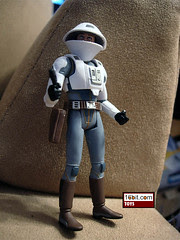 Bio: Ralph McQuarrie's sketches of Rebel troopers show the distinct headgear and simple uniforms that articulate the lean, focused intensity of the Rebel Alliance forces. In his drawings, McQuarrie has captured the Rebels' unity of purpose and determined independence that characterize the Alliance's proud fighters. (Taken from the figure's cardback.)

Commentary: The McQuarrie Concept Figure collection was one of the most exciting things to happen to collectors in 2007, which tells you both that the interest in core characters is supremely important and that actual characters from the movies that Hasbro can convince fans to buy are a diminishing resource. Rounding out the collection of concept figures was this Rebel Trooper, which, unlike the other figures in the collection, wasn't a design a lot of fans would have remembered. Or even seen, much less asked for. Less a great design for a space trooper and more an amusing look for the henchmen in the undersea lair of the vile Dr. Bartholemew Clam, the figure is an oddity on a variety of levels. He has a two piece removable helmet, a holster, removable chest armor, and loads of articulation. Oh, and he's posed in a manner that fits in well with the vintage Kenner line from the 1980s. In many respects, as a collectible, this is the absolutely best McQuarrie Concept figure because it seems to incorporate every fan request for an action figure short of ankle articulation. The joints are well-hidden by the costume design, he can hold his blaster, his helmet can be removed, there's a lot of detail here, and he still looks like he stepped off an artist's sketchpad. How can you go wrong?

The only problem with the figure is that it's fairly non-essential, which while not a crime is an issue with many figures in the line as of late. Chewbacca with bandages, Vader with a new cape, Anakin with new hip joints... it's all Hasbro finding ways to extend the line-- which is what fans say they want-- but it's also filler. This figure would have been an unthinkable release in 2003, and in 2008, it just goes to show that the line is moving in a direction that's less "what would be an awesome seller?" to "OK, we need to come up with something new for fans to buy, what's left?" It's weird that Hasbro could make such a great figure based on a design that probably wouldn't be on any fan's wish list, but here it is. Love it.

Collector's Notes: A member of the one-timer's club so far, this figure is unlikely to make a return appearance any time soon. Hasbro shipped it under a new SKU in 2008 with a display stand, and it's essential for anyone looking to complete their set of collector coins or McQuarrie Concept figures. Everybody else, take it as you will. It seems like it would have made a great character to have attack Vader's secret apprentice in The Force Unleashed though.