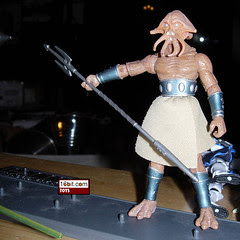 Bio: The Quarren launch an undersea attack on the Mon Calamari. Supported by the Separatists, the quarren swell their ranks with battle droids but encounter strong opposition when Kit Fisto and his clone troopers come to the aid of the Mon Calamari. (Taken from the figure's cardback.)

Commentary: Back in 2003, Lucasfilm and the Cartoon Network showed us dozens of awesome new characters, troopers, and weapons in the first Clone Wars cartoon. Initially largely hated on-- don't let the recent revisionist history fool you-- it took a long, ling time to get figures to market like this Quarren Soldier. While not super articulated, the figure does sport 12 joints and can sit thanks to his loincloth not being plastic. Given the elegant simplicity of the original animated designs, it isn't too hard to adapt the figure to a decent "realistic" look. All you really have to do is take the original Tessek figure and remove some clothing, and you've pretty much got it. With the figure's muscular build, Hasbro managed to work in quite a bit of articulation without looking too hokey. The unfortunate thing is that there's not much else going on here-- the detail is good, there's a small knife that fits under his loincloth, and there's just a little bit of armor to admire. It's a shame this figure didn't come out five years earlier, but thankfully the figure we did eventually get was pretty much perfect. Although the cloth is a little bulky, it's still a fairly decent release that begs for a few more figures in order to complete the scenario from the battle on Mon Calamari.

Collector's Notes: For some reason, this figure came and went in a hurry-- there's a good chance it will show up again but it's not currently scheduled to ship in any non-Wave 2 cases.