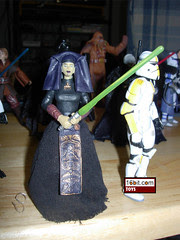 Bio: Luminara is a Jedi General sent to Kashyyyk in the final days of the Clone Wars with a squad of clone troopers including AT-RT Drivers. (Taken from the figure's cardback.)

Commentary: Repaints are a fact of life in the modern Star Wars line, and this Luminara Unduli is a repaint with a couple of other changes. Based on the 2005 figure's body, this action figure has a cloth "skirt" which seems to be a recolored Tusken Raider garment. In other words, it's not the same as the original release. The figure's costume has been repainted significantly, but here's the problem: you can't tell. The original figure was a sort of dark greenish color, and this new one is a dark greenish blue. The various adornments are slightly different in color, so gold bits are bronze and a few spots aren't decorated as lavishly as before. But, again, you can't tell. The character's unique look continues to shine through but it really is unfortunate that Hasbro took the trouble to come up with a new piece and new paint applications to result in a very samey looking figure. Until I put the 2005 and 2008 releases side by side, I thought it was the same exact figure.

Despite being just different enough to make you mad, you should totally get a Luminara Unduli based on this mold. She's basically super-articulated, but she has cut elbows. Other than that, she's pretty great. The only real room for improvement left would be in the face, as her eyes and face paint could use a little bit of improvement. Well, for a $7-$8 figure, she could use some improvements. As part of a $10 exclusive pack, she's a bargain.

Collector's Notes: She was an interesting release. In some stores, she was one of the first to go. In others, she lingered. Either way, she was eventually findable as a Target exclusive if you looked around. She's pretty cheap too so feel free to get one if you can.