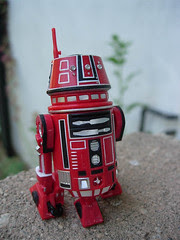 Bio: This astromech droid belongs to "Red Leader" Garven Dreis. Many R5-series droids are used on starfighters for onboard navigation, diagnostics and repair. (Taken from the figure's packaging.)

Commentary: A truly striking design, R5-K6 repaints the 2006 R5-D4 figure in a very red and black color scheme. Hasbro teased us with a cardboard facade of the droid in an exclusive X-Wing fighter a few years ago, so it's really great to finally have the figure along with an improved version of his owner, Red Leader Garven Dreis. As you can see, the figure boasts a vibrant color scheme with black and silver bringing him to life. The design is unlike anything else in the figure line, so if you're a fan for high-quality repaints and/or astromech droids this one is a must-buy figure.

The droid sports a retractable third leg, and if you twist the dome the "bad motivator" pops up just like on R5-D4. Since this is the only release of this droid, it's worth tracking down. Hasbro did a great job here, and with any luck it might se a reissue in the chance that you missed it.

Collector's Notes: This set has come and gone, and collectors have taken notice. Get one ASAP if you want one, or wait for interest to drop eventually as figures tend to do.

This droid actually has incorrect body markings for Garvin's droid. The body should be white with red markings. This droid actually replicates a droid seen only in a behind the scenes still from the Death Star. You can learn more and seen the picks at the Astromech site here: http://www.angelfire.com/droid/astromechs

A truly stunning deco for an astromech droid. I fell in love with it when the first BP pictures were released. Glad I was able to find the pack, which was one of only three I purchased in 2009 ... and was certainly the best.